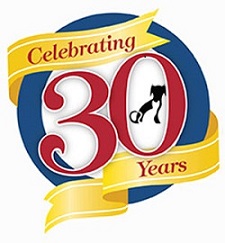 For most of us August 22, 1990 has no special meaning. But for 18 people, that day was historic. The by- laws for Friends of the Shelter were written and officers were elected. It was the start of an all volunteer group of people concerned about animal welfare. Over the years, many changes have taken place but the one thing that remains constant is their love of animals. Here is the story of the journey from 1990 to the present.

Initially, Friends of the Shelter (FOTS) worked only with Boone County Animal Shelter. Over the years, FOTS expanded their aid to include Kenton, Campbell and Grant County Animal Shelters. Eventually Pendleton and Gallatin county shelters were added thus expanding assistance to the current six northern KY shelters. Several FOTS members have volunteered and fostered for these shelters over the years and still do so to this day. 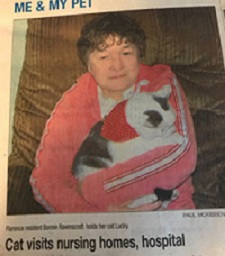 In the beginning when the focus was only on Boone, FOTS members groomed animals, helped with off-site adoptions, bought needed equipment and took photos of the shelter animals for local papers and TV. Fundraisers were held to offset some of the expenditures. FOTS participated in craft shows, set up donation banks in area businesses, held raffles, sent out donation letters, recycled aluminum cans and even offered flea dips for a fee. Another interesting activity was the Pet Therapy program where shelter animals were taken to local nursing homes and rehabilitation facilities. In 2000, FOTS had an entry in the Florence Y’All Parade and their depiction of their Pet Therapy Program won Best of Show!

As more shelters were added, fundraising became an even more crucial part of FOTS. There was an Easter Dog Parade, a Derby Party, yard sales, and donations from companies that match funds of employees that are members of FOTS. The money raised enabled them to buy items on the shelters’ wish lists. Some of the things included cat cages, a cat condo and playpen, a catch pole and safety stick along with leather gloves, a dog trap and leashes, floor drying fans, a hydraulic grooming table, plus dog and cat food and treats. 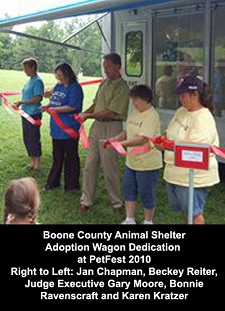 One of the biggest items that FOTS helped fund was a mobile adoption unit for Boone County Animal Shelter. A veterinarian from Louisville had donated $150,000 to Friends of the Shelter. A generous grant of $50,000 was then made by FOTS towards the purchase of the Adoption Waggin’. A ribbon cutting ceremony took place at PetFest 2010. Doing the honors were Gary Moore, FOTS members (pictured) and Beckey Reiter, the director of BCAS at that time. Hundreds of animals have been adopted from the Waggin’ as it travels to various pet stores and adoption events loaded with adoptable dogs and cats. The Adoption Waggin’ proudly bears the emblem of Friends of the Shelter.

In the early years of FOTS, all money raised was used to support the shelters. In some cases, emergency veterinary treatment was offered to owned animals, however that was stopped due to lack of funds. It wasn’t until 1994 that spay/neuter help began. That year 40 animals were altered. Initially spay/neuter certificates were offered to owners of animals who had allowed their pets to have litters which were then turned into a shelter. The hope was that the pet would be altered, thus preventing future litters. In addition, certificates were given to owners for animals that had not yet had a litter. The value of these certificates was usually between $25 and $30. Each month five owned cats were altered for free. 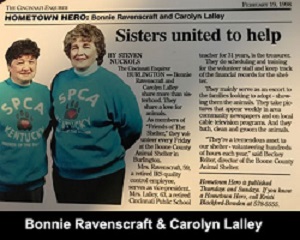 Although the focus today is still on low cost spay/neuter, FOTS now works with the United Coalition for Animals (UCAN) and Ohio Alleycat Resource & Spay/Neuter Clinic (OAR). Some years saw other organizations, like the Joanie Bernard Foundation, assume the financial responsibility for cats. In those years, FOTS was able to concentrate all their resources on dogs. In 2019, 295 owned dogs were altered thanks to FOTS. However in 2020, FOTS has resumed subsidizing the spay/neuter of cats in addition to dogs.

Fundraising continues to be a critical part of the spay/neuter program. Money raised enables FOTS to help reduce the number of animals entering our shelters. Events have been held at Muggbees, The Farmstand Market and Cafe, Fabulous Furs, Black n’ Bluegrass Rollergirls and Benton Family Farm plus programs have been set up through Kroger, Chewy, Goodshop and Amazon. Recently a yearly Quarter Auction has been added but our biggest fundraiser is PetFest. 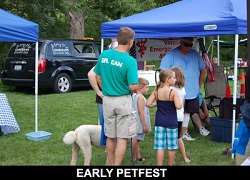 The first PetFest was held in 2002. In the early years of the event, it’s estimated that approximately 200 people would attend, visiting 13 to 15 booths. Animal Planet’s Pet Star show sent producers to one of the early PetFest events to judge a pet-related contest. Video was taken and Mario Lopez, the host, featured it on one of the shows. Other years saw notables like Max and Patty Montoya and Diane Whalen judging contests. In 2019, there were 38 booths and 17 sponsors representing shelters, rescues, veterinarians, and other animal related and general interest businesses. In addition there was a Silent Auction tent and a refreshment booth. It was the biggest year so far for PetFest. 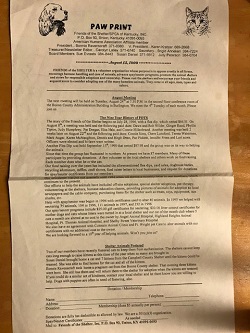 In order to keep up with all the fundraising events and changes to the spay/neuter program, FOTS began publishing a newsletter in the late 90s. Originally the newsletter was a black and white legal size flyer printed on both sides. In 2010, the newsletter was changed to a multipage color brochure. Now in addition to the newsletter, FOTS has a website (www.friendsoftheshelterky.org) and a Facebook page. Those interested in animal welfare and controlling the pet population are encouraged to “like” the “Friends of the Shelter, Inc/SPCA KY” Facebook page.

As 2020 gets underway, FOTS can proudly look back on some special moments. The Adoption Waggin’ will be 10 years old in June and Friends of the Shelter will be 30 years old on August 22. This all volunteer 501(c)3 group has helped to save thousands of animals through adoption and low cost spay/neuter. Their membership has grown to 180 members. Sisters, Carolyn Lalley and Bonnie Ravenscraft, joined FOTS in the early 90’s. They helped mold Friends of the Shelter into a dedicated group of animal lovers who are helping to eliminate euthanasia and overcrowding in shelters through various programs. Sadly, Carolyn passed away in 2011. Bonnie is still active and was just recently re-elected as President.

FOTS would love to see more people get involved. Meetings are held the last Tuesday of every month. There is a small core of active members that attend each month to try to improve the lives of dogs and cats. New members are always welcome to help with fundraising and to offer ideas and support.